The Japanese written language is a fascinating thing.

The first thing many people think of when they hear someone mention Japanese is Kanji—the Chinese characters that are easy to spot within most written Japanese.  “Why can’t they just spell things out!” some people exclaim, sometimes pointing out how written languages have advanced since the days of Egyptian hieroglyphics.

What is not as well known, however, is that Japanese does, in fact, have a writing system for spelling things out that complements the kanji.  This system, known as Kana, has two parts to it:

Romanized Japanese (e.g. Japanese written with the English alphabet) is known as Romaji.

One thing that sets the Kana writing system apart from systems like the English alphabet is that while English uses each letter to represent a specific sound (e.g. consonants vs. vowels), Kana is what is known as a syllabary—each character represents a complete syllable unto itself (typically a consonant-vowel pair, such as ka, gu, ya, etc.).

When kanji are used in a sentence (as shown in the first example), whatever is not covered by the kanji is written out in kana.  Many times you’ll see kana printed above or beside kanji to offer reading assistance, such as ; these are called furigana.  This is especially common if the kanji is using an unusual reading or if the writing is intended for an audience that may not be fluent with kanji.

So why learn to read if it’s so complex?

Even if you only ever plan on speaking Japanese instead of writing it, learning to read Japanese unlocks the potential of the language in a wide variety of ways.

In this article we’re going to introduce the Hiragana characters and offer some useful strategies for learning them.  There’s a lot to take in here, so I’ve broken things down into a series of smaller groups within the article.  Don’t feel like you have to push through everything at once.  Bookmark this article and come back periodically as you’re ready to tackle more.  For new learners, it often takes about two weeks to learn Hiragana if you’re actively practicing with it.

As mentioned, the kana systems are syllabaries, meaning that they combine an optional consonant sound and a vowel sound.  The one exception to this is a special character used to add a standalone N sound to the end of another syllable.

Due to this nature, when the whole set of kana is being displayed it is customary to do so on a table with the consonants along the top (leaving a column for no consonant on the far left) and vowels along the left.  Each kana character is then placed where the appropriate consonant and vowel intersect (e.g. K + A = KA か; N + U = NU ぬ).

The complete basic Hiragana table is as follows:

The most important thing to do when learning kana is to write them—a lot.  When I first started teaching myself to read Japanese I used the following strategy:

Let’s take a couple examples from the first chapter of the classic manga Ranma 1/2: 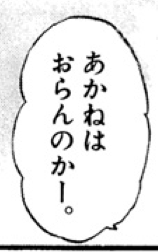 I’m providing the translations as a convenience, but at this stage translating what you write is not as important as getting the practice writing the text with pencil and paper.

The small circle at the end of the sentence (。) is how periods are written in Japanese.  The line right before it is used to extend the length of the vowel for the syllable preceding it (e.g. かー is read as ka-a).  Sometimes a squiggly form of it can be used to help indicate a more expressive tone.  These marks are never part of the official spelling of any hiragana words.

Now let’s look at a couple of sentences that include kanji as well as kana.  If the text is too small to read in the image below, tap or click on the image to see an enlarged version.

Since this series is aimed at an audience that is still learning how to read, all kanji have what are known as furigana next to them, which are hiragana characters used to spell out the reading for the kanji.  In texts intended for more advanced audiences, you might only see furigana used to show how to pronounce unusual words. 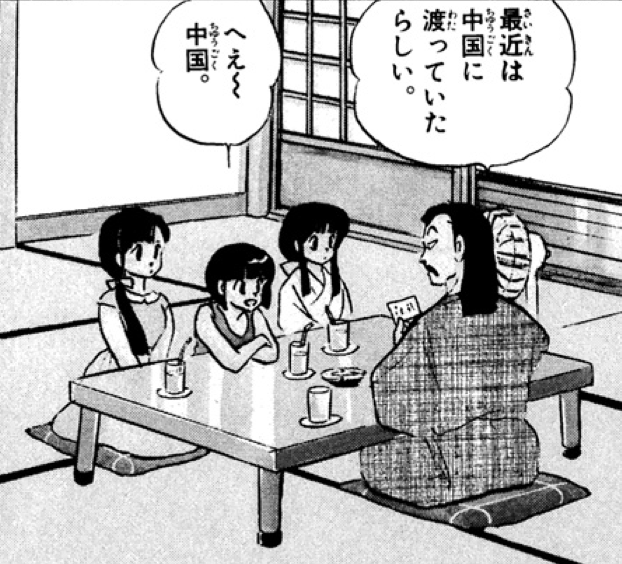 Comparing the text against the original image, you can see how the furigana show how to read the kanji.  Further, if you wish to rewrite the text without the kanji for a word in there, all you need to do is replace it with the text serving as the furigana.

There’s that squiggly line we were mentioning earlier.  Hearing that their guest is coming to them from China has clearly piqued her interest.

Another helpful strategy for remembering how to write kana is to have particular key words that you associate with each character to help you remember how they are written.

As we introduce each group of kana, we will include a group of simple words (common ones where possible) which use the kana we’ve learned so far.  These are excellent candidates for key words to associate with each kana character, though in the end the best choice is whatever is most memorable for you.

The Japanese writing system places a heavy emphasis on learning how to write things properly; properly internalized it becomes a powerful tool for memorization and recollection.  Throughout this guide we will show you how to write things in the proper manner so that you can practice writing your kana properly from the start.

The following are unofficial groups of Hiragana characters we’ll be using to facilitate learning them.  The characters in the group will be presented first, along with a series of words using them and the definitions for each word.

Click on any group to jump directly to its lesson.